What should claimants do when limitation is about to expire?

This article, co-written with my 4 New Square colleague Hannah Daly, notes the recent Court of Appeal decision in Grant v Dawn Meats (UK) and considers the options open to Claimants, including seeking a stay.

When things go wrong in this situation, the courts always say that service should not be left to the last minute. That is the best advice of course, where time allows. But what if a claimant does not have the luxury of time, and limitation is about to expire? 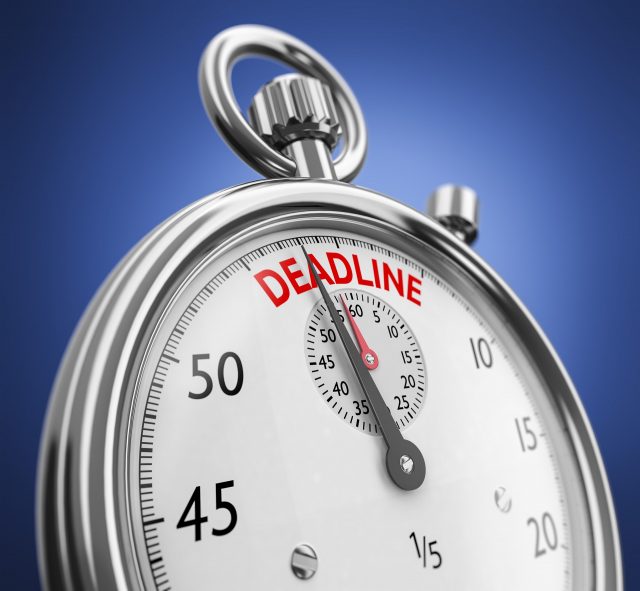 One option is to invite the proposed defendant to enter into a standstill agreement to allow more time for proceedings to be issued.

However, the anecdotal experience is that defendants have been less willing to do so since the increase in court fees and the LASPO reforms making ATE premiums irrecoverable, as defendants are more willing to test whether claimants really to have the mettle and financial resources to issue proceedings.

Claimants should also be aware that there are a number of potential pitfalls with standstill agreements, as a cautionary article by our colleague Helen Evans pointed out.

If claimants do decide to serve proceedings, they must ensure that they allow themselves sufficient time to do so correctly, as research and investigation may be required. Another colleague Carl Troman has very helpfully listed his top tips on service of proceedings.

It is also important to note the costs consequences of issuing proceedings. Claimants often assume that they can just issue proceedings and then use the 4 month period until they have to be served to decide what to do – allowing for the option not to serve the proceedings at all.

It should be noted that where a claim form is never served but has expired, the proceedings have still been started and are not a nullity. Under section 51 of the Senior Courts Act 1981 the claimant may then be ordered to pay the defendant’s costs.

The costs which have been incurred by the defendant since the proceedings were commenced might be minimal, but that is not the end of it. Section 51 allows an order for the costs “of and incidental to the proceedings”, and these cases hold that a claimant may therefore have to pay the costs which the defendant has incurred prior to the issue of the claim, such as in responding to pre-action correspondence.

Another option is to issue the proceedings and then seek a stay. This is encouraged by by court rules. For instance, paragraph 14.2 of the Pre-action Protocol for Professional Negligence states:

If proceedings are for any reason started before the parties have followed the procedures in this protocol, the parties are encouraged to agree to apply to the court for a stay whilst the protocol is followed.

A very recent decision by the Court of Appeal in David Grant v Dawn Meats [2018] EWCA Civ 2212 provides some assistance for Claimants in this situation.

Mr Grant sought to bring a claim against his employer, Dawn Meats, following an accident at work.  The claim was to be brought in accordance with the Pre-Action Protocol for Low Value Personal Injury (Employer’s Liability and Public Liability) Claims (“the EL Protocol”).

The employer admitted liability but the parties were unable to reach a settlement. Mr Grant issued the claim to avoid the expiry of limitation on 24 June 2016, and at the same time sought a stay of the proceedings.

The employer argued that the claim had not been served within the 4 month period of its validity, seeking a declaration that the time for service was not affected by the stay, with the consequence that the claim was time-barred.

At first instance, the judge dismissed that argument, holding that a stay applied to every step in the proceedings and that therefore the claim form was served in time. However, on appeal, the court reached the opposite conclusion. Mr Grant appealed.

The EL Protocol, which applied to Mr Grant’s claim provides, like the Protocol for professional negligence claims, that parties can apply for a stay where necessary to allow them time to take the steps required by the Protocol (at paragraph 5.7).

The EL Protocol also states that a claim can be issued under Part 8 of the CPR where the parties are unable to agree quantum. Paragraph 16 of the Practice Direction to Part 8 deals with limitation and provides that:

16.1 Where compliance with the relevant Protocol is not possible before the expiry of a limitation period the claimant may start proceedings in accordance with paragraph 16.2.

(1) start proceedings under this Practice Direction; and

(a) the claim is for damages; and

(b) a stay of proceedings is sought in order to comply with the relevant Protocol.

16.3 The claimant must send to the defendant the claim form together with the order imposing the stay.

In the Court of Appeal, Coulson LJ considered the effect of these provisions and the purpose of a stay more generally.

He considered that the conventional analysis was that a stay operated to ‘halt’ or ‘freeze’ proceedings: no steps were required or permitted to be taken by either party during the period of the stay; when the stay was lifted or expired, the parties should pick up where they left off at the time the stay was imposed. That analysis, he ruled, applied as much to the service of claim forms as to any other step in the proceedings.

Further, the requirements of Paragraph 16 of the Practice Direction to Part 8 were clear: a party in the position of Mr Grant should start proceedings by issuing a claim form and at the same time seek a stay. There was no mention of the need to serve the claim form in those circumstances.

Were the position otherwise, Coulson LJ considered that Practice Direction would have to be completely reworded.  Moreover, the steps that would need to be taken to effect a stay would be unnecessarily cumbersome.

He was also reluctant to reward any element of opportunism on the part of Dawn Meats in seeking to take advantage of a procedural uncertainty in order to avoid the claim, particularly in circumstances where liability had been admitted.

The court therefore concluded that the claim was not time barred. A stay had been imposed on 7 July 2016, 13 days after the claim was issued. The stay was lifted on 30 November 2016. Mr Grant therefore had four months, less 13 days, from that date to serve the claim form.

The case thus offers reassurance to prospective claimants that where limitation is close to expiring, they will still be able to preserve their claim by starting proceedings and seeking a stay to allow the relevant Pre-Action Protocols to be followed.

You may also find this article on limitation periods helpful.

previous
The Arkin cap - are its days numbered?